Macarons: How hard can they be?

Pretty *(%#*&^ hard actually. My toddler has added a few choice words to his vocabulary in the past two weeks since I decided to try my hand at these French morsels.

It all started when my friend Siobhan generously bought me back a beautiful little box of them from Laduree in Paris. 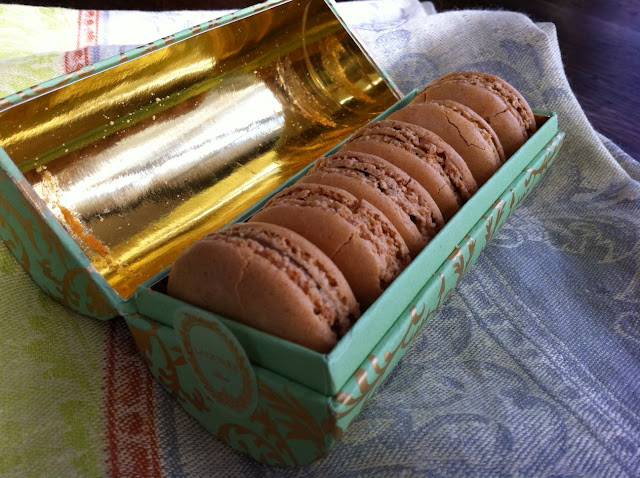 They were salted caramel heaven. 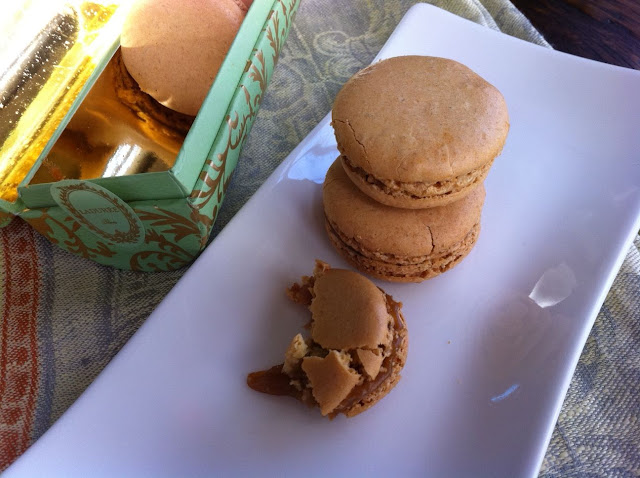 But instead of crossing the harbour to La Renaissance or inventing yet another fake excuse to visit Balmain (oh look, there’s Zumbo, may as well sneak in while I’m here), I decided to have a go at making them myself.

This madness coincided with a dinner party I was planning for my aunty’s birthday and while flicking through a few cookbooks and mags with Mum, we found a Donna Hay recipe for vanilla macaron and raspberry ice cream sandwiches. Dessert solved!

Here’s what I was aiming for: 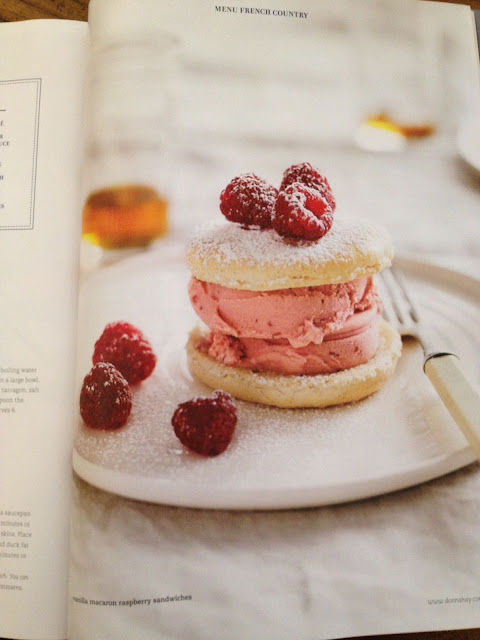 My first batch turned out like big chewy wafers. They spread into each other and stuck to the sheets of baking paper. It’s a special talent of mine, making things stick to non-stick surfaces. Ask Mr LP how many friand tins I ruined in the first few months of my little business venture.

The next attempt didn’t produce enough macarons for our dinner party of eight so while they were resting to form their “skins,” I made another batch. Exactly the same ingredients, exactly the same method, vastly different results. Some stuck, some not. Some lovely and plump with perfect little feet, some flat as pavers.

There was only one constant throughout – meringue up my arms, in my hair, on the mixer, obscurely on the upper cupboards...

Getting the shits now.

The fourth batch was passable for a family dinner and dessert was a hit (with a lot of help from my little sister’s delicious raspberry ice cream. Thanks Dani!) 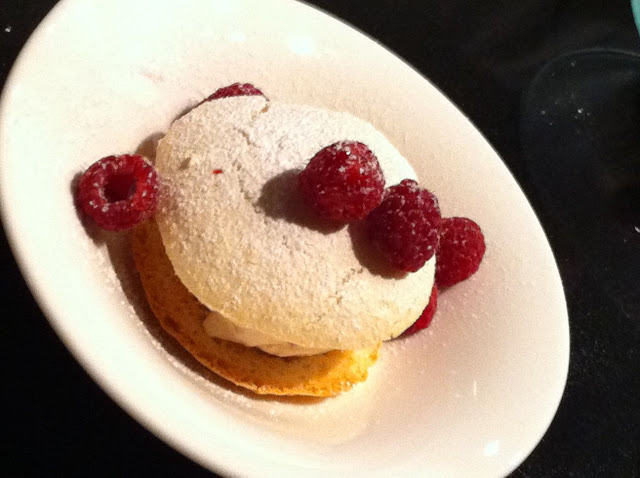 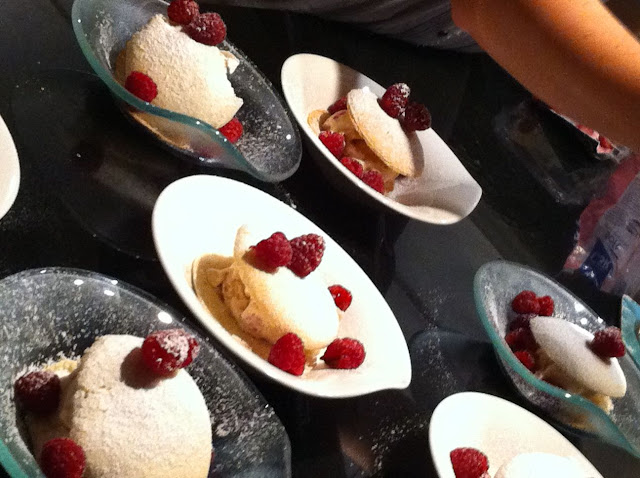 Determined not be defeated, I abandoned Donna and went instead to the source. The French don’t take shortcuts, sorry Donna. I am a big fan, but these babies cannot be whipped up in under an hour.

My research taught me the following critical tips:

v  I needed eggs that weren’t super fresh. Leaving the egg whites out overnight is a good substitute

v  When using colour or flavouring, boil it down with the sugar syrup to avoid upsetting the moisture balance by adding too much liquid at the end

I’m pretty comfortable making Italian meringue. It’s what I pipe onto my lemon tarts several times a week so I was quietly confident going into my fifth attempt at les macarons. 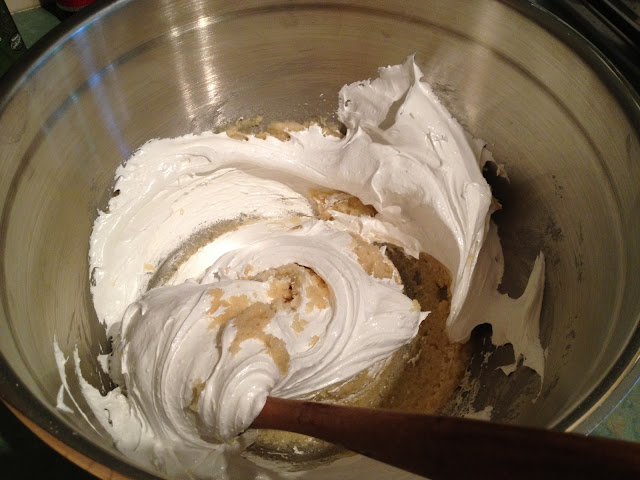 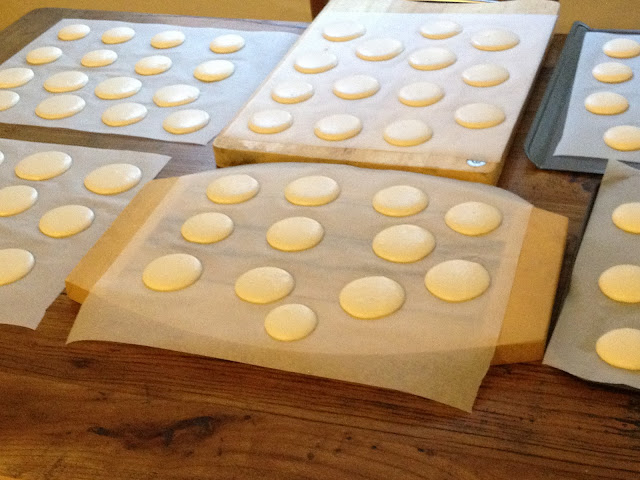 I wanted to use a few different fillings without having to make several batches of macarons so I added a half teaspoon of vanilla extract to the sugar syrup to give them a versatile base flavour. 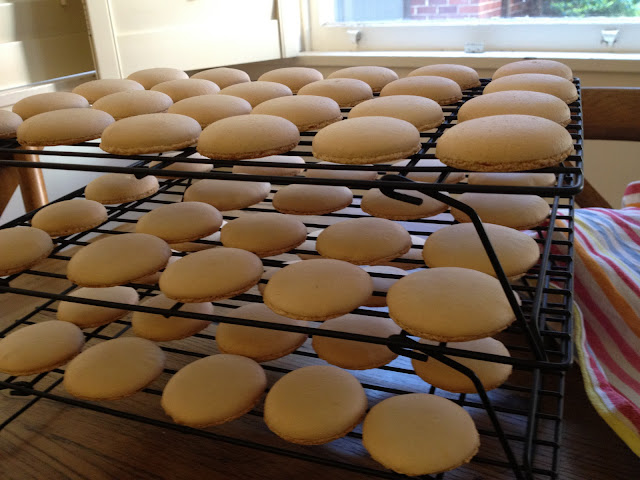 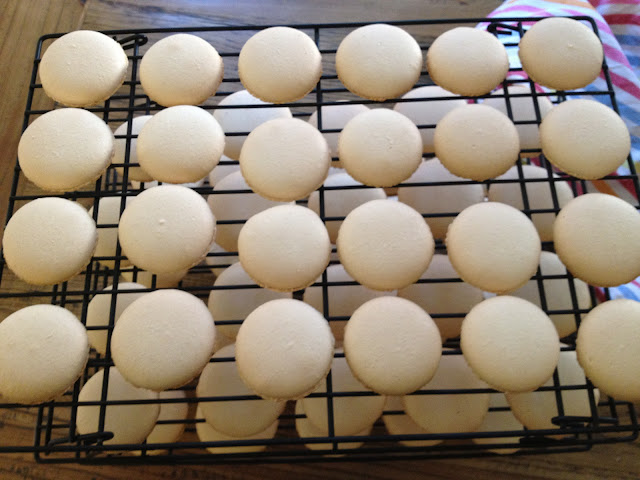 And they worked! Joy. Relief. Triumph! The recipe I used as my guide is from Baroque Bistro's Macaron Masterclass, posted here by Not Quite Nigella.

Now for the fun bit. 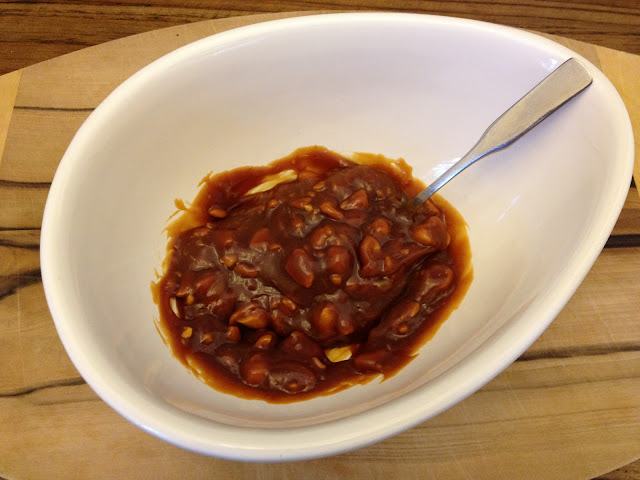 I had some salted peanut caramel (recipe at the bottom of this post) left over from a batch of tarts so I blitzed it with a stick blender until it was smooth.

Traditionalists say to pipe fillings onto your macaron halves and then sandwich with the remaining halves. I say a modest dollop with a teaspoon works just as well. 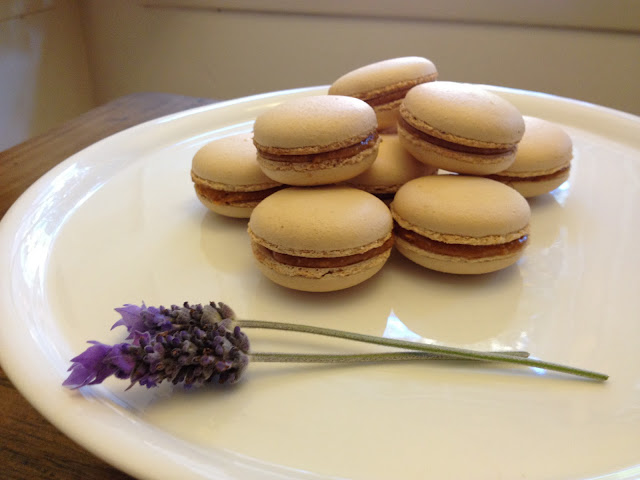 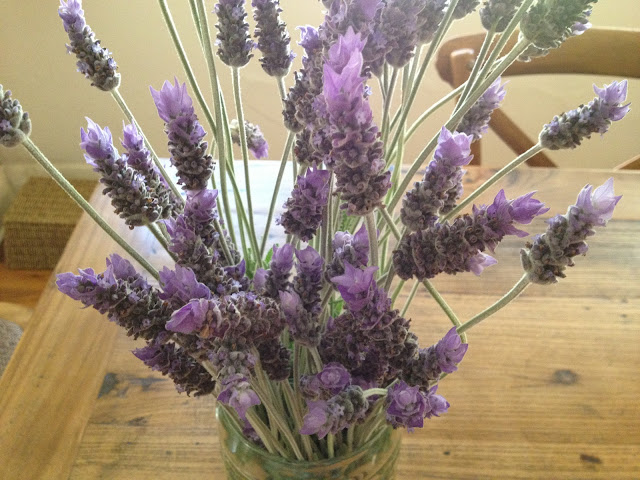 For the next dozen, I made a white chocolate ganache and folded in some raspberries (recipe at the bottom of this post). I dusted them lightly with icing sugar and gave this lot away in little boxes of four as pretty gifts. 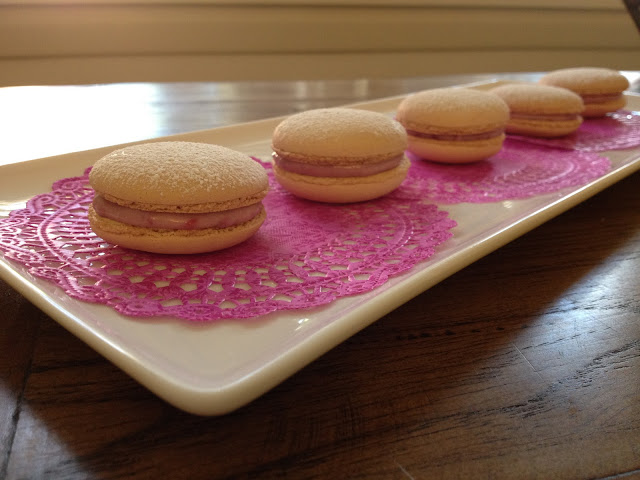 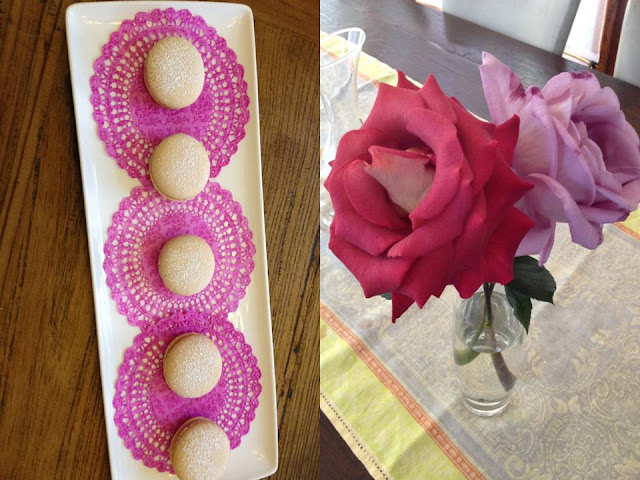 For the last batch, I mixed up a dark chocolate ganache (recipe at the bottom of this post) and spread one half of the macarons with that and the other half with a smear of delicous rose petal jelly from Sugar Daddy’s Confectionery www.sugardaddysconfectionery.com.au 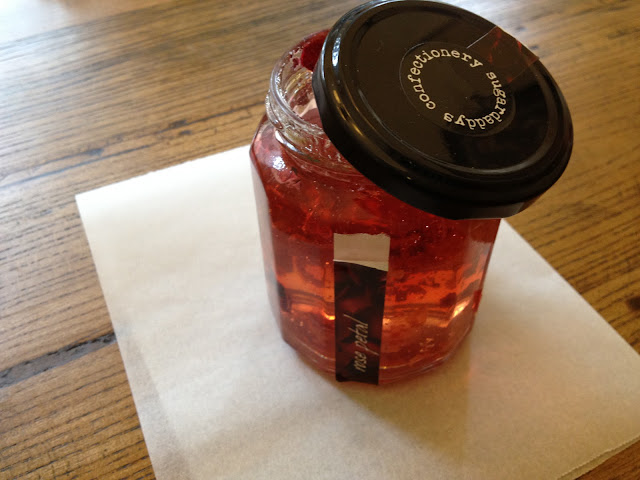 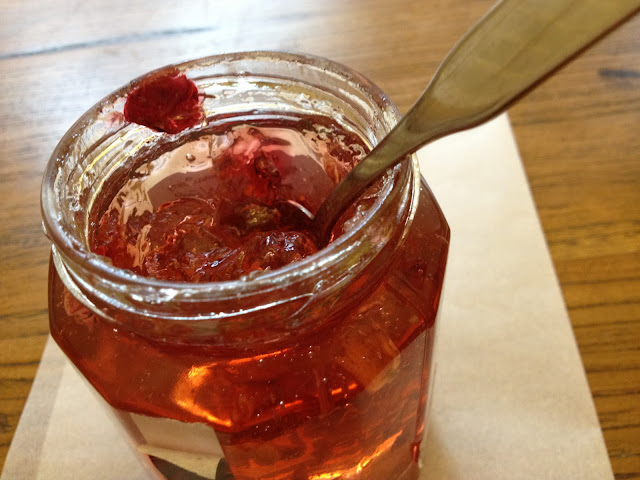 Sandwiched together and dusted with icing sugar, they are a thousand times better than any form of Turkish Delight I’ve ever had. These, we kept. 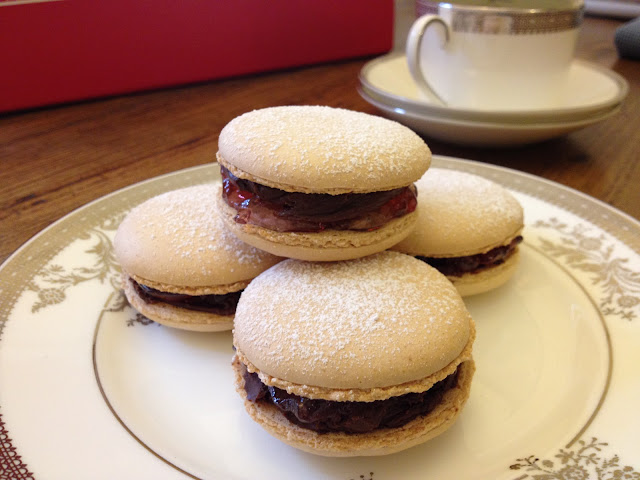 Place caster sugar in a heavy based saucepan and melt slowly over medium heat without stirring. Swirl the saucepan to make sure all the sugar is incorporated in the melting mass.
When the sugar is all melted it will turn a dark caramel colour and begin foaming. This will happen quickly so don't take your eye off it.
Take the saucepan off the heat and immediately stir in the butter (be careful, the mixture will spit), followed by the peanuts, salt and cream. Stir until smooth and glossy then transfer to a heat-proof bowl and place in the fridge to cool.
Use as a sauce for ice cream or a filling for tarts or macarons. For the macarons in this post, I blitzed about 3/4 cup of the peanut caramel with a stick blender until smooth and sandwiched in between vanilla macarons.

Heat the cream in a bowl over a saucepan of simmering water until almost boiling. Add the white chocolate and turn off the heat. Wait for the chocolate to melt into the cream (about 5 mins) then gently stir until you have a smooth, glossy ganache. Place in the fridge to cool for about 15 mins, then gently stir through the raspberries.

Heat the cream in a bowl over a saucepan of simmering water until almost boiling. Add the dark chocolate and turn off the heat. Wait for the chocolate to melt into the cream (about 5 mins) then gently stir until you have a smooth, glossy ganache. Be careful not to overmix. Place in the fridge to chill for about 15 mins or until cool enough to sandwich between macarons. Don't put it in the fridge for too long or it will harden. 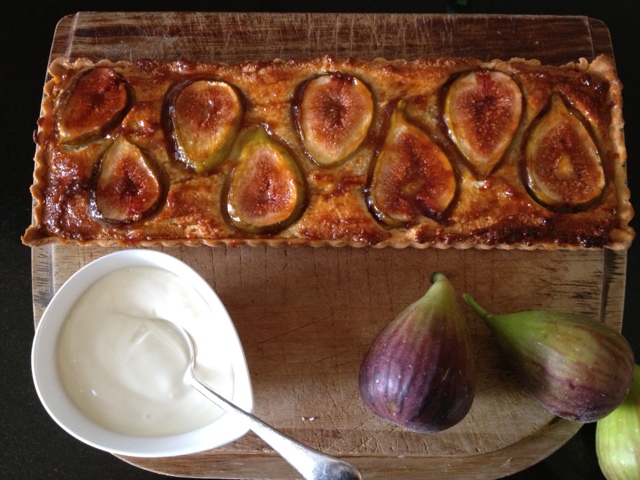 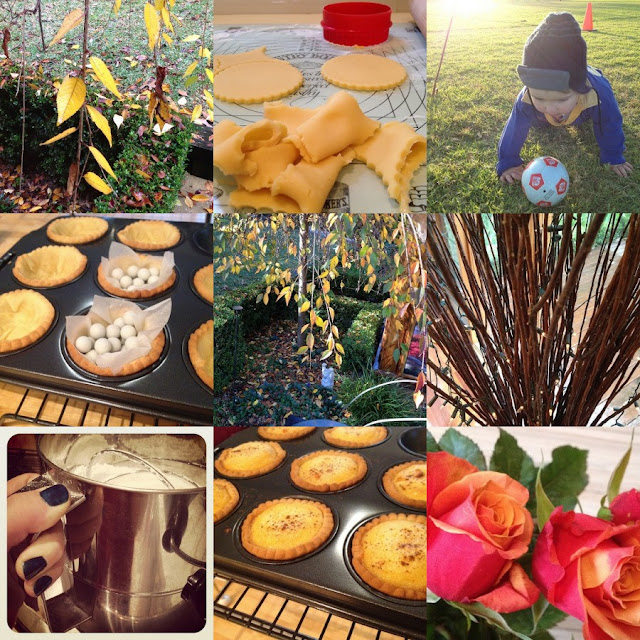